Who is the Non-Human Prosumer?

Who is the Non-Human Prosumer?

This text is available in English only.

In the keynote discussion of the Anxious to Make stream, which included Kazys Varnelis and Jutta Weber, the question of whether there is a defining aesthetic or ideology tied to what we call “maker culture” came into focus.

Varnelis, a historian and analyst, dismissed and rightly ribbed the institutionalized and widely adopted methodologies of open learning associated with maker culture. He showed an image of a family hack day with middle class children invited to pillage and “remake” rubbish heaps of tech waste. Implicitly constructive rather than open learning, the image calcified a distinctly western and obnoxious fetishization of scarce resources, reducing a necessity of impoverished children to mere leisure.

Varnelis aligned this contemporary consumption of maker culture with an absorption of play into exchange value, departing from the everyday ritualistic use value in maker communities. The authentic lineage of maker culture, Varnelis argued is a history of hermetic, ritualistic, community-based objects, including hybrid Pagan and Catholic masks made by his Lithuanian grandfather; low-tech DIY fanzine culture; and hot-rodding, used as shorthand for the counter-cultural souping-up of technology. 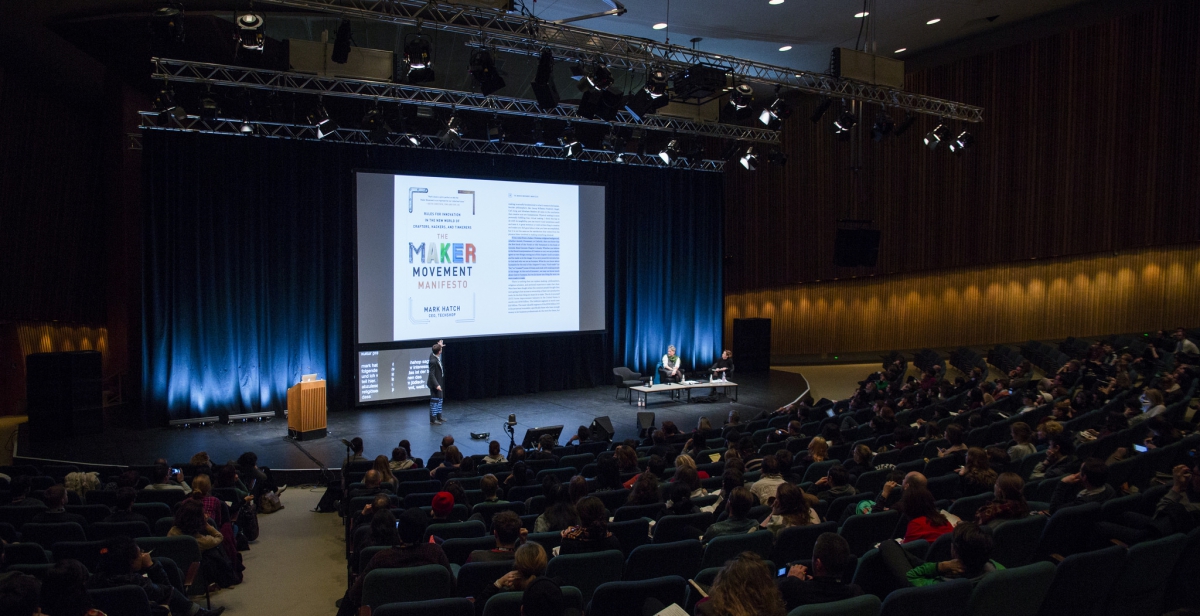 While the origin of the DIY maker is often cited in the ideology of the Art and Crafts movement of the late-nineteenth century, the later DIY maker of fanzines and masks was, according to Varnelis, closer to the authenticity of the everyday maker. Arts and Crafts was purported as a way for the middle classes to be delivered from its alienation, albeit through the submissive consumption of “hand-printed” wallpaper, without actually having to trifle in the messy process of making.

I was surprised to find little mention of what I perceive to be the driving argument of maker culture: accessiblity and transparency. The familiar clear Perspex casing and exposed electronics of maker culture are an invitation to get under the hood of technology. Though only briefly mentioned in Varnelis’ long list of “maker” histories, it is hot-rodding that resonates with me as critical in the emergence of the post-Fordist prosumer and consequently that of contemporary maker culture. Hot-rodding was a community innovation directly responding to the desire to get under the hood and customize the standardized Model T produced by Ford at maximum production-line efficiency.

In his 1965 essay The Kandy-Kolored Tangerine-Flake Streamline Baby, Tom Wolfe refers to custom mechanic to the stars, George Barris, as California’s answer to Picasso, with a penchant for Brancusi’s curvilinear abstract line. When Wolfe wrote this essay, barriers to access for the everyday custom mechanic included the privileges of tools, expertise, and free time to get under the hood and modify one's technology. But the main barrier today is often that the inner workings of the car are sealed by the manufacturer from being tinkered with by the owner. If only we could do away with this blackbox technology, instead making transparent and adaptable consumables…like, say, the Raspberry Pi! Then we would just need the skills, oh, and the time. However, Kustom Kulture, like any art form, as Wolfe points out, was always more than the sum of these apparently reproducible parts. The craft of the maker requires a cultural codification: in the case of the “kustom” community, a cool and counter-cultural flavor. Like any ritual practice, and unlike coopted maker culture, this apparently authentic DIY maker methodology is uniquely inaccessible. 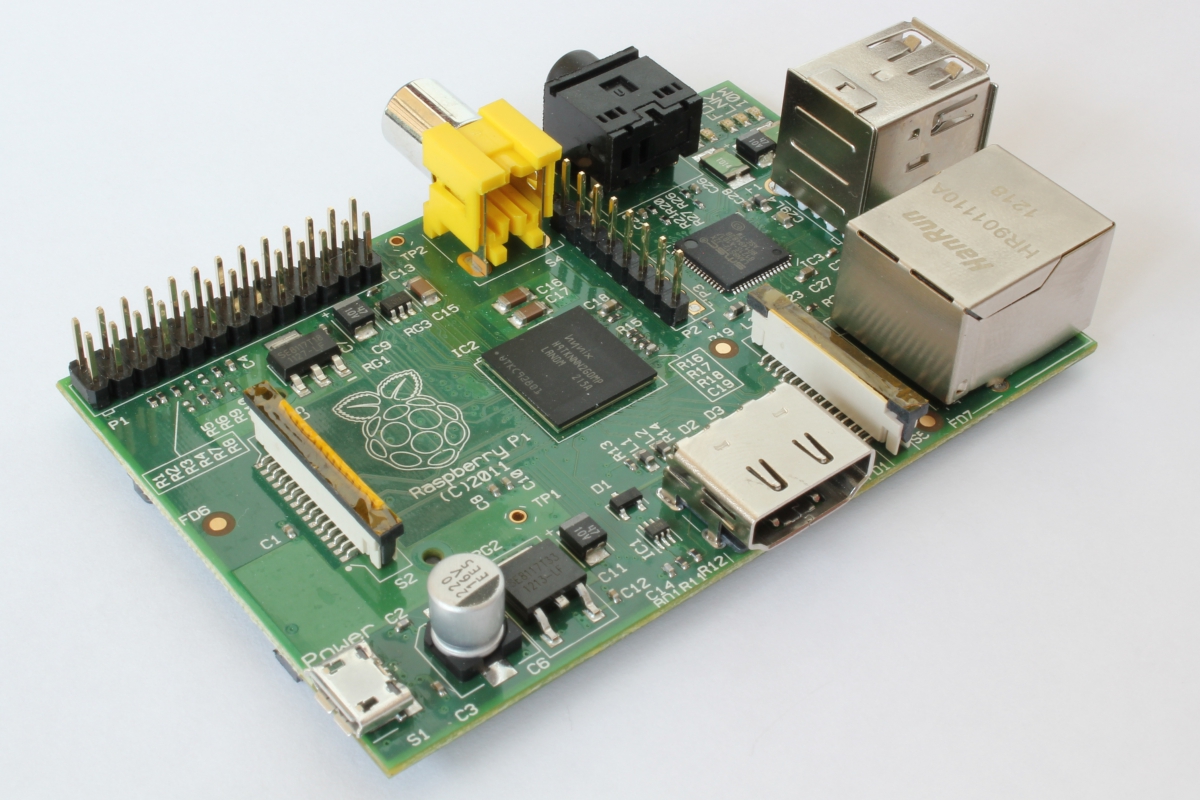 Side-stepping this issue of inaccessibility, a preference for the rhetoric of transparency and democracy, at the expense of the practice of making, is what separates the ideology of Arts and Crafts from that of DIY culture. In his talk Varnelis promoted an actualized relationship with the materiality of making, but I was left asking; how might we set aside the problem of the dominant infrastructural force of “accessibility” rhetoric that has coopted his dear authentic maker of everyday life?

Accessibility is necessarily tied up with a liberal ideology of openness; the definition of an accessible technology is that it’s “capable of being influenced” and “accessible to new ideas.” As Weber, a media theorist, outlined in her presentation, maker culture therefore owes much to the tenets of systems theory, in that it incorporates user behavior within the governing logic of feedback-loop design. However, as in the case of artificial intelligence, a recent obsession of maker communities, self-learning genetic algorithms that earnestly promise to optimize design through feedback actually work through iterative processes of randomized data, rather than relying on the feedback response of a prosumer.

Design through evolutionary algorithms constantly feeds back interaction according to a networked array of environmental, material, and user-based factors. I found myself initially mis-recognizing the genetic algorithm as a form of design from above, in contrast to the decentralization of post-Fordist design. My judgement was somewhat distorted by Weber’s choice of example; Bigdog, a military robot that successfully demonstrates self-learning forward motion. I hoped for a studied appraisal of the military strategies underpinning Bigdog—what might combat with Bigdog look like?—but Weber only briefly pointed to the question of “the pre-given value systems” driving these algorithms. While the military and telecommunications industries are clearly invested in the inception of projects like Bigdog, I was left wondering about the relationship between Varnelis' distinctly human-centric definition of authentic “everyday practice maker culture” and the “automated maker” of the evolutionary algorithm.

Weber provided a link to a wiki of technologies incorporating design by genetic algorithm, and delving into this I found the “evolved antenna” elucidated my understanding of the potential of the iterative design process. The antenna's design is a result of information provided by a network of prosumers, including radiation levels, the Earth’s magnetosphere, and the responsiveness of the materials from which the antenna are made. Perhaps self-learning AI can provide a wider definition of agency by developing a non-anthropocentric prosumer. 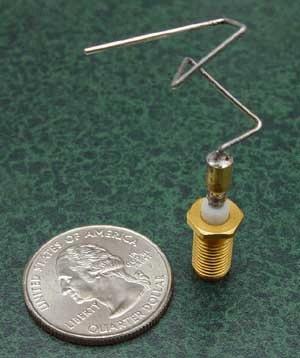 The function of transparency is accountability. The apparent transparency of the maker aesthetic is a material distraction from what and who we should really be holding to account. The rhetoric of transparency and open learning that is played out in contemporary maker culture currently serves as a drive for innovation. However, if transparency and openness are ideologies, or perhaps amount to the “pre-given value system” referred to by Weber, then to whom is this message addressed? If transparent methodologies and technologies provide accessibility for a particular community, who are they also instrumentalizing and who are they excluding? While my proposition of the genetic algorithm as a non-anthropogenic prosumer that connects human and non-human interests holds positive environmental and ethical potential, this potential can only be realized by challenging the existing moral code that denies the voice of non-human agency, communities lacking access and queer cultural practice. A genetic algorithm, just like a patterned wallpaper or a hot-rod car, cannot be tethered to only one set of values. A further picking apart of the infrastructure of the rhetoric of transparency guiding the design of “maker culture” is required.