Market for Immaterial Value: Unmaking Debt and Other Fictions

Market for Immaterial Value: Unmaking Debt and Other Fictions

Everything is jelly now
Air, clouds, us
The jelly is the material out of which the immaterial world is made
and we are moving towards exhaustion
— Notes by Nefeli Myrodia, edited by Valentina Karga, on The Gigantic Jelly-Blob performance

This text is available in English only.

Valentina Karga began her practice working with rather concrete ecologies—self-sufficient systems by which she could sustain herself as a human body. We first met in 2012 at 30 Days in the Garden, an event that took place in a backyard in one of Berlin’s quieter suburban neighborhoods, where the Greek-born artist had set up a network of experimental devices and scenarios for producing the basic resources and food she needed to live for 30 days without producing any waste. These were relatively simple techniques and configurations posed as a counterpoint to the dominant ways of feeding oneself in the city. To supplement a diet of what would otherwise have been mostly tomatoes and greens, visitors were invited to bring edible offerings to trade for the surplus of what she managed to grow. I swapped some crumbling homemade biscuits for a handful of golden potatoes. The project website, Berlin Farm Lab, announced what was desired most on any given day: flour, rice, oil, and tracked her embodied and collected research over the summer and beyond to become a not-insubstantial resource of its own.

Trained as an architect, Karga was concerned here with building infrastructures of support—self-made, self-managed, not always fully functional, but open to input, improvement, and appropriation by others. These were architectures involving objects and spaces but also networks of knowledge and ideas. Some four years later, informed by the pragmatics and precarity of being an “unmarketable” artist in the gentrifying creative capital city of Berlin, Valentina’s work has come to address much more directly those immaterial relations and systems of exchange that one needs access to in order to live. On the premise that “art cannot be oblivious to its own conditions of creation and exchange,” her current project with partner Pieterjan Grandry, Market for Immaterial Value, is a multilayered platform for investigating the possible role and future(s) of the artist in a world driven by the demands and flows of neoliberal capital, via a collective process of renegotiating “value” and exploring contemporary economics. Unwilling to simply buy into the artist-as-entrepreneur mode of staying afloat, but without a backup plan to meet rising rent, Karga writes of feeling she was somehow inventing a nonexistent profession, and so needed to create “not only my ‘art’ but all structures around it that could possibly support it and make it work.” Not knowing exactly what those structures might look like, with this project she set out to create various spaces of conversation framed as research, in partnership with collaborators including anyone who has attended or participated in one of their events. 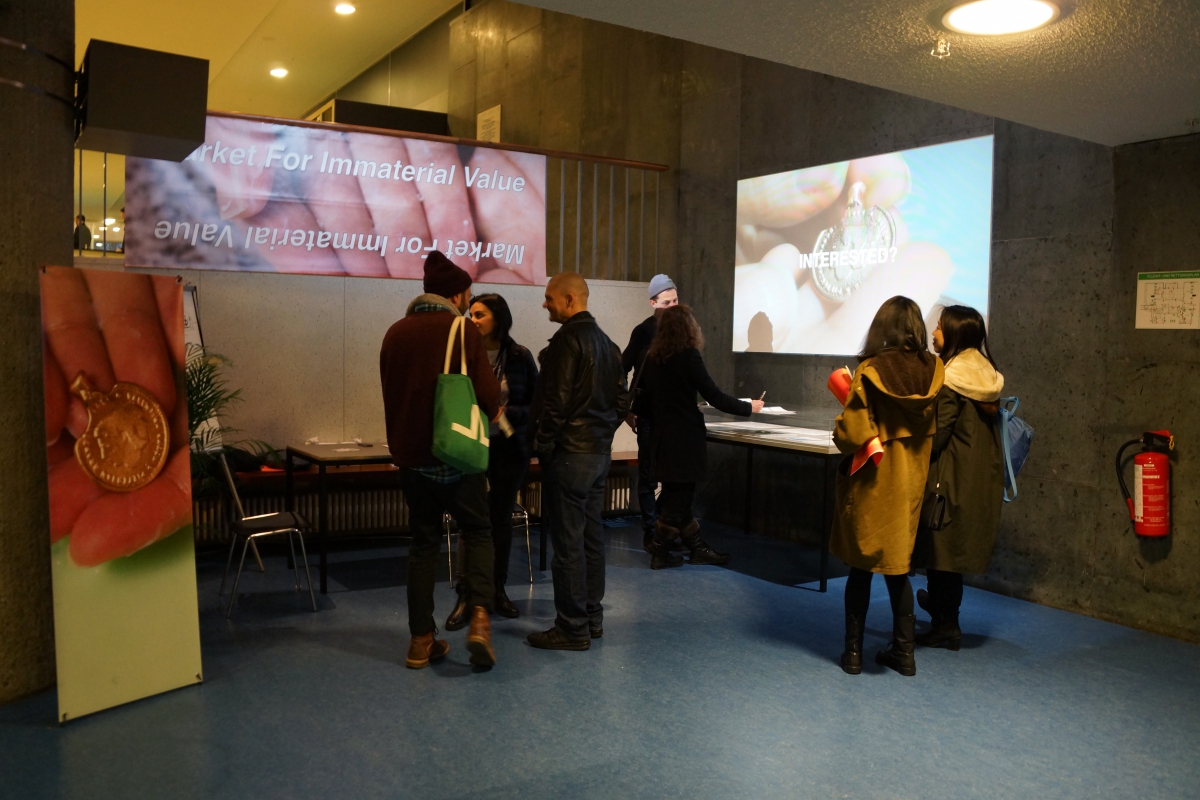 My initial encounter with the Market for Immaterial Value came when I was a guest at a dinner event, “Un-quantifying Value,” hosted in mid-2015 by The Institute for Endotic Research, a discursive, interdisciplinary initiative from the multidisciplinary artist Lorenzo Sandoval based out of his tiny Berlin kitchen. Up for discussion between the assembled practitioners and thinkers were alternative ways of valuing non-material artistic labor in the context of affective capitalism. Hacking the finance market, venture capitalism, and the prospect of Silicon Valley becoming a place for studio practice were debated, and though no clear resolution emerged we did share around a very good zucchini pasta and still-warm homemade bread.

As with the earlier projects, Market for Immaterial Value effectively hacks a particular system, trying to understand how its infrastructure works, and recreates it on a small, DIY scale. This becomes a way to both offer a critical perspective on that system and gain a degree of empowerment or autonomy from it, whether by producing one’s own food or one’s own speculative investment scheme. Given the financialization of everything under a capitalist economic system that no longer emphasizes the production of goods and services but rather speculative economic growth, and where money seems to weirdly “mis-measure and misrepresent everything,” according to writer Max Haiven, it makes sense that the financial market and its relationship to art production (and to social relations in general) has become the new focus of intervention practices such as Karga’s.[1] The project was initiated in 2015 with funding from the Vilém Flusser Residency Program for Artistic Research, a cooperation with Berlin’s transmediale festival for art and digital culture, and the question of how it might sustain itself (and the artists behind it) in the future without external funding is here shifted from its customary position in the shadowy background of artistic practice to instead being core content of the work. 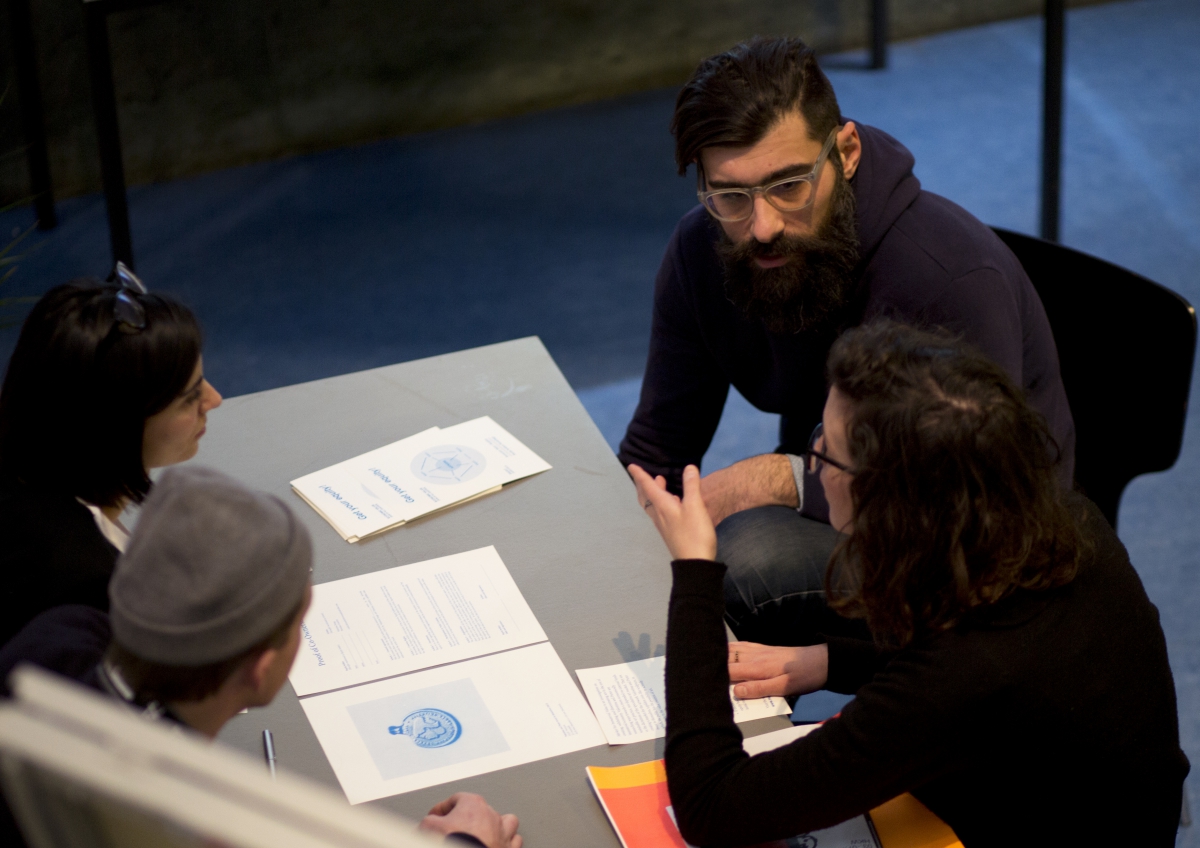 Karga and Grandry sell shares of their specially minted gold coin to the public, who become equity owners. The coin has currently exceeded its material value due to the amount of stock sold. (Image: transmediale // design akademie berlin )

One of the Market’s outputs has been the development of a prototype financial instrument for capturing value generated by the artist but too often accrued elsewhere within (and outside) the art world. Valentina and Pieter Invest in Themselves, one aspect of the project, is a specially minted gold coin whose value is determined by equities sold to an expanding group of public investors, who then collectively own the work. Envisaged as a kind of pension platform for the artists and their small-time investors; its central commodity is not subject to the speculative fluctuations of the art market but steadily rises in value as new investors join. As the writer Max Haiven points out in an interview on the project’s website, the proposition manages to reduce risk as a “self-defensive maneuver” within the current market model, allowing cultural producers to “regain some of the means of social reproduction,” but doesn’t necessarily generate new socialities or subjectivities based on economies or forms of exchange outside capitalism. For Valentina this can at least be read as a negative effect creating friction, which itself is a form of commons. 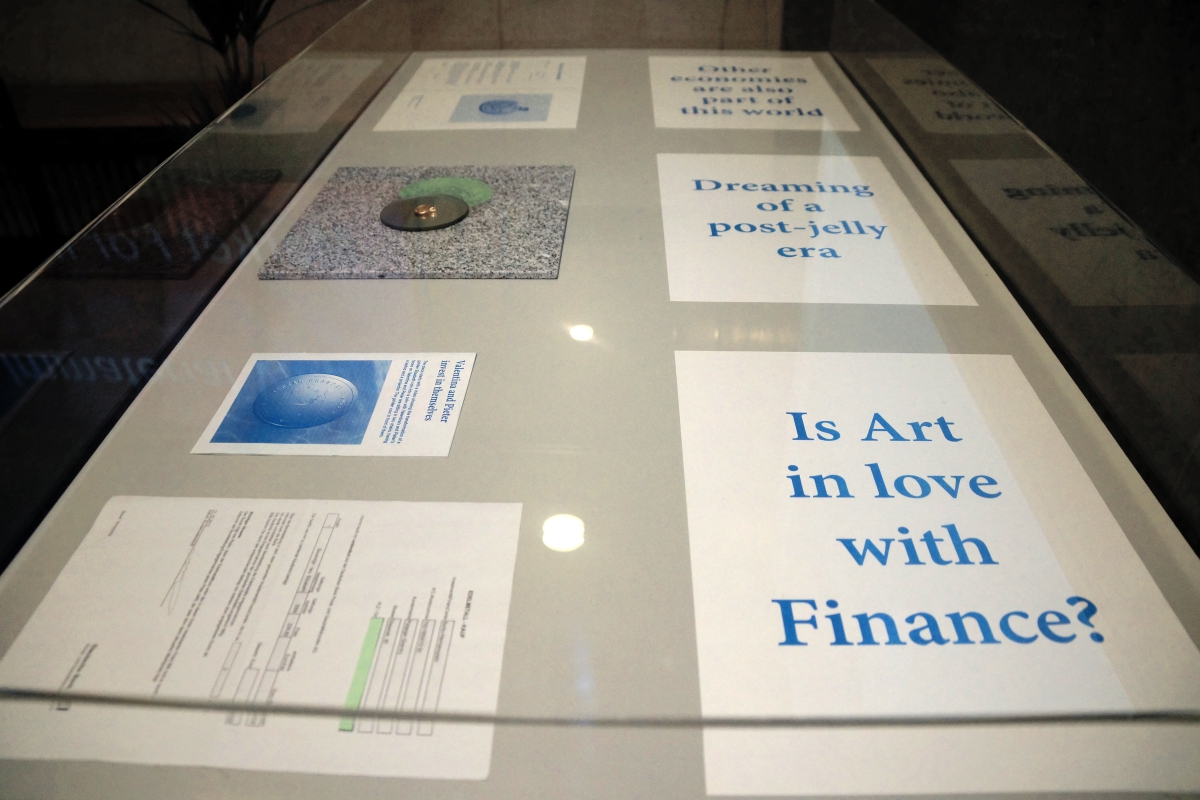 Market for Immaterial Value during transmediale 2016.

Other arms of Karga’s and Grandry’s research include a series of podcast interviews with economists, theorists, designers, and artists, which are presented on the project website, interrogating how hegemonic economies and finance markets work and can be worked around: in one, Ben Vickers of the unMonastery collaborative living project talks about his efforts to establish the autonomous secular-monastic community posing as a tech start-up; in another, theater director Jan Ritsema calls for a giant collective bank account and a new culture of unmeasured sharing. The project also includes a cheerful/cynical T-shirt range, Debt is Fiction, and a participatory lecture-performance, The Gigantic Jelly-Blob, which had its first outing at the 2015 Athens Biennial and resurfaced at transmediale in Berlin earlier this year. The Jelly-Blob is a tool for opening discussions to a wider audience who actively shapes the work, by which the market becomes “a space for communication, togetherness and embodiment of ideas, that transform through a performative process.” Fiction and metaphor are used to make a form out of discourse that reflects on “the current imagination about value(s),” with each participant contributing a specific role to a collaborative lecture where the jelly stands in for (financial) capitalism, as the artists write. 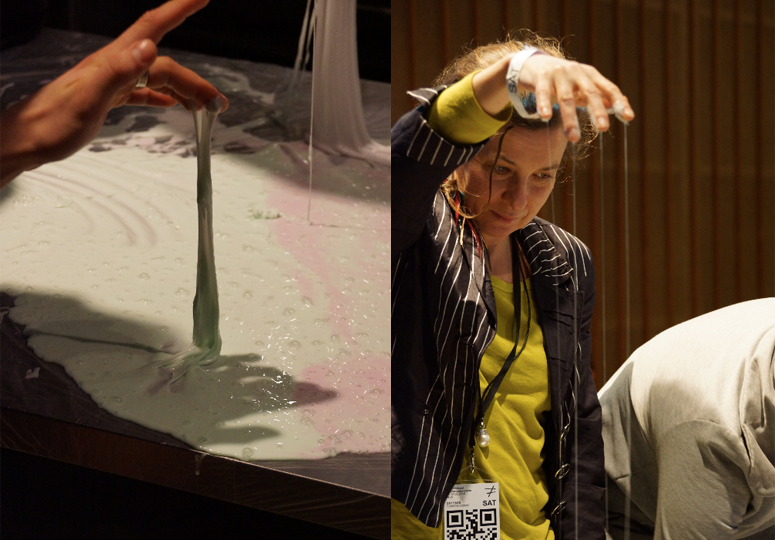 In the participatory performance The Giantic Jelly-Blob, jelly is used as a metaphor for financial capitalism. (Images: Pieterjan Grandry)

More firmly rooted in the material realm, Karga and Grandry are also co-founders of Collective Disaster, conceived as an amorphous collective able to adapt its shape and constituents according to project, resources, and site. Incorporating a handful of artists, architects, and designers across Berlin and Brussels, the team have produced a public composting toilet and performance stage, The Temple of Holy Shit, and are now working on a bath heated by a giant compost heap, Miracle Mountain. Amidst the exhaustion of defending from the ever-encroaching jelly a viable framework for a critical practice between fiction and reality, it is something of a miracle that Karga can still declare “it feels like one can change institutions and structures of the real world on the pretext of making an artwork. Isn’t that amazing?” Not everything has been surrendered to the jelly just yet.

This article was first published in Runway magazine.

“Culture File: A Market for Immaterial Value?” a radio interview with Karga and Grandry